How the airbrush became my artist tool of choice

My interest in the airbrush started years ago. I got into mountain biking in my late teens, it was a new sport at the time, not as big a scene as it is today. A few friends and I would hang out at our local bike shop where I ended up working for a short while. My Interest grew, leading to racing cross country and down hill . I wasn’t that good but I enjoyed the events and hanging out with other mountain bikers. 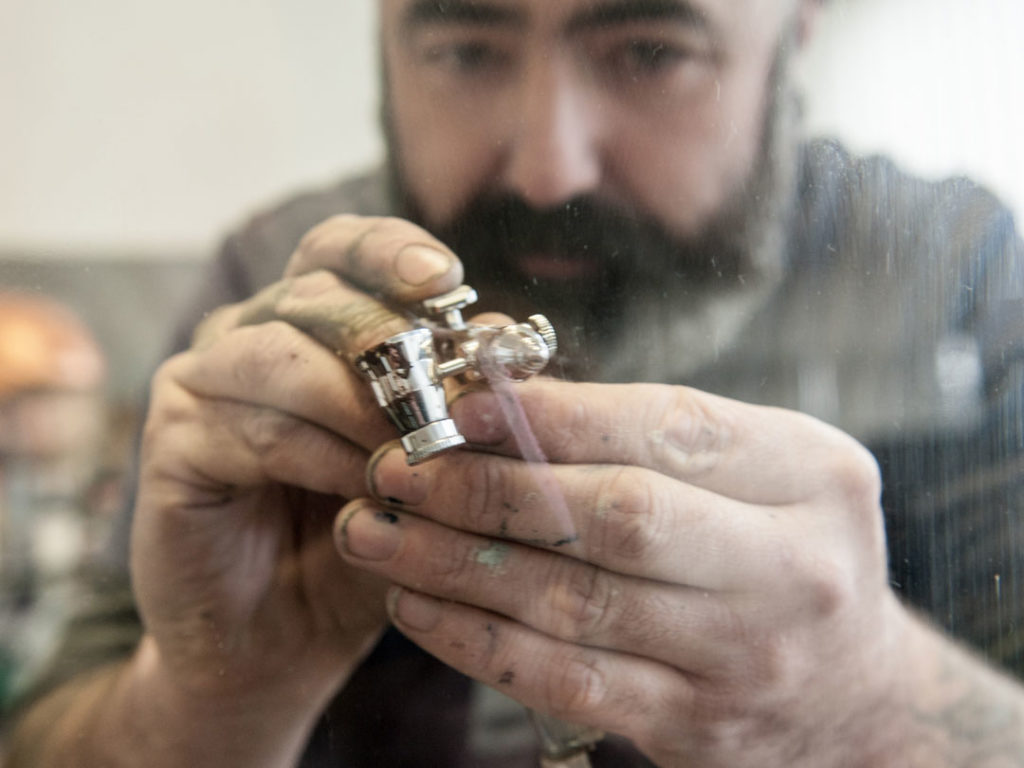 One of the top riders in the world at the time was John Tomac, an American sponsored by Raleigh USA. His helmet was painted all fancy with eagle feathers. After reading an article in an MTB magazine, I discovered the guy responsible for the artwork on the helmet was called Troy Lee. He used airbrushes to create his designs. I wanted to know more about him and what he did so I went in search of more info which was hard to find in the days of no internet.

I came across some magazines in ‘Easons’ the local bookshop and magazine outlet. It was in my favourite comic book shop, ‘Forbidden Planet’, that I eventually I came across Airbrush Action magazine, which then became my bible for many years. I read everything I could find as I really wanted to try airbrushing.

Eventually I found a hobby/model shop called ‘Mark’s Models’ that stocked airbrushes so I bought my very first ‘Badger’ airbrush there. My first attempts were crude. I was using cans of air that didn’t last very long in comparison to a compressor which is what I now use. In the beginning I painted friends helmets and bike parts thinking to myself ‘This is Great’, but it wasn’t as easy to learn as it is now.

It’s funny, with the internet these days teaching yourself anything is so much easier. There are so many web sites and Youtube channels where you can watch and learn from others and share experiences. Back when I was starting out it was trial and error and there were a lot of errors! but that’s how you learn or at least it’s how I learned, the hard way !

Down through the years I’ve tried out a few different brands of airbrush, Badger, Aerograph, and Aztec, but eventually I settled with Iwata as it just fit me best. I came across iwata airbrushes about 15 years ago when I was at a ‘the motorbike and scooter show’ in the R.D.S, Dublin. There was a stand ‘SM Designs’ at the show displaying airbrushes, airbrush paint as well as advertising workshops on how to use the products. 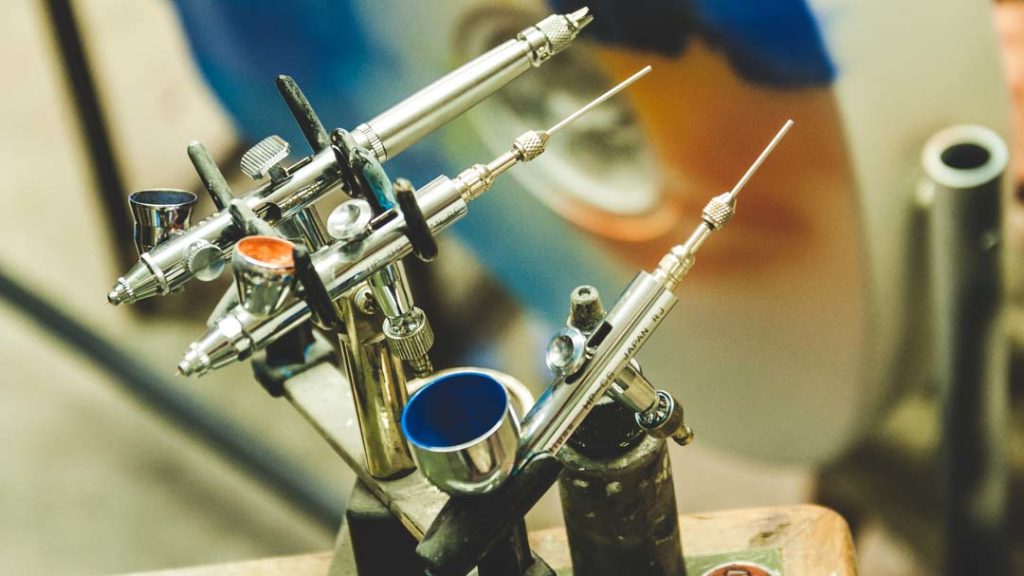 A selection of airbrushes used for artwork

This was the first time I had seen anyone else in Ireland actually doing what I was trying to. I got talking to the man running the stall ‘Simon Murray’ and found through him I could get everything I needed for airbrushing. That day I bought my first Iwata eclipse airbrush. It’s a company I still use to this day. I’ve stuck with that make for several reasons;

I was hungry to learn and so I was constantly looking for examples of work by other airbrush artists. Inspired by H.R Giger and Drew Blair, I continued to focus on perfecting my craft and finding my own style.

It was a natural progression to painting on canvas instead of helmets, seeing what I could achieve with the airbrush as an artist tool. I loved every minute of the learning process and knew from the outset that this was the path for me and the career I wanted to pursue.