One of the artists I most admire and take inspiration from is an American airbrush artist, Mr Cory Saint Clair, who specialises in hyper realism. I had the privilege of meeting him recently when I participated in a workshop he was giving on photorealistic portrait painting.

Being a self-taught artist, myself, I am constantly trying to find new ways to improves my skills and techniques in my artistry. Recently, while researching this, I was contacted by Mr Simon Murray from SM Designs in Ballymena.

He had just announced a new 3-day workshop he wanted to run and asked me if I was interested in taking part. The workshop was being run in conjunction with Cory Saint Clair, Tim Gore and Craig Fraser as part of SM Designs birthday celebrations. Other Courses Click Here

I made the decision to book my place immediately. The idea of meeting and learning from these esteemed artists was a once in a lifetime opportunity, but also hanging out with other likeminded people was hugely exciting for me and this would be my first workshop related to airbrushing.

SM Designs is quite a long drive from Longford, three hours on the road.  I hadn’t driven that distance in quite a while so even the road trip was a bit of an adventure.

I managed to get lost while passing through Cavan, I was trying a short cut that didn’t quite work. The trip after that went smooth enough though. Passing by lough Neagh was something else, I had never been up that part off the country so it was a weekend of many firsts.

Pulling up to SM Designs was a little unnerving, mainly because I was late and the last to arrive, I hate being late! The place was really cool, an old farmhouse just outside the town. When I found where I was supposed to be I introduced myself and found an empty seat and waited for the class to begin.

As it turns out I ended up sitting beside Cory Saint Clair which was super exiting and yet intimidating at the same time, as I have admired his work for such a long time.

A few days earlier, I was sent a copy of the image that we would be working on during the workshop, a comic book icon of the highest order “Wonder Woman” by DC Comics.

Part of Cory Saint Clair’s airbrushing technique is the use of a stencil of the image to be painted. Not really the way I paint normally but I was there to 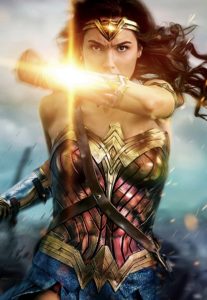 learn. It’s a time consuming process so we didn’t get any painting done on the first day.

The break for lunch provided an opportunity to get to know other artists attending and the tutors. I met people there from the UK, Ireland and Crete. Levels of skill varied as well as interests, because there were 3 workshops mine was photo realism, Tim Gore’s workshop was special effects prop painting and Craig Frasier’s class was custom graphics.

It was really cool chatting to these people, I had lived in a bubble in relation to my airbrushing. Only getting to chat on line to like-minded artists, so meeting and chatting in person was a real buzz. Swapping stories, hints and tips and getting a gauge of the level I was at.

By the end of the first day I was shattered and heading off to find my B&B was a welcome departure. The Howe B&B was a 5-minute drive away in an area called Broughshane in Ballymena.

When I arrived, I was greeted by Jennifer, the woman that ran the B&B, who she showed me to my room for the next couple of days. I have to say I was really impressed with the place, a bit old fashioned but very clean and extremely comfortable and being a vegetarian they were very accommodating.

Again with Cory Saint Clair, and we got down to painting almost immediately and using the stencil work from the day before. The process he uses was very interesting, I had seen a number of his video tutorials but seeing it in the flesh was a different ball game altogether. Cory has over 30 years’ experience behind him as an airbrush artist so not only attending but sitting beside him was unbelievable.

The end of day two saw us have a barbeque as another way to mingle and get to know each other. Food, beer and chat on a really nice summer evening was a great way to finish off the day. The intensity of the day had taken its toll again and returning to the B&B was well needed. After a shower and a phone call to Anna, my partner, I went to bed and was out cold.

The piece I was trying to achieve during the workshop proved to be very detailed and it appeared that I may not get it fully completed, but I realised the most important thing was learning new techniques and improving my airbrushing skills.

Part of the added benefits of the weekend was an opportunity to buy the equipment we were using, at a discount. The fact that in our workshop we were

using the Iwata Custom Micron, the highest specification airbrush in their product range and an airbrush I’d have, until now, only dreamed of using.  It didn’t disappoint either, I was blown away by this piece of kit and made the decision that I needed one if I was to progress and achieve the finishes I wanted with my artwork.

Seeing what the artists in the other workshops had created over the weekend was also a great experience. Even though we were quite involved in our own project, we also had an opportunity to experience the techniques other people were using in the other workshop and courses. I love learning and I soak up anything I think can help me, so taking in what I could from the others I found immensely helpful.

The end of the day was filled with mixed emotion, I was heading home to Anna which was super nice but I was leaving a place where I had met people with the passion for airbrushing and with that made so many new friends.

I always find when you have spent time somewhere and had such a great time it’s always very difficult to leave, but of course leave I had to.

Another 3-hour drive ahead of me, but this time I had a little more time to take in the sights. By the end I was quite relieved to be home to Anna and our dogs.